A little platformer made for the lowrezjam. The challenge was to incorporate the game within a 64x64 pixel canvas.

Controllers are supported.
AWSD or Arrow Keys
Space/Z to jump
J/X to slash
K/C to throw your axe

Your games are all fantastic!

every one of them that i play it's just pure joy

One of my favourite games on itch. I still play it regularly lol

This game is really cool!

Not sure if I'm dumb or it's a glitch but I literally can't figure out how to get past the second screen. There is a platform blocking progress and I can't attack it, can't press down to go through it, tried jumping on it a dozen times, tried seeing if there was a jump-smash attack but there isn't, I've pressed literally every button dozens of times and nothing is happening, tried attacking the walls, climbing the axe all over, and nothing at all is happening.

Edit: Oh god, I had to hold down and then press jump. That's not very intuitive and should probably be mentioned somewhere that you can do that.

Yeah... Perhaps you're right but it is a pretty common mechanism to drop from platforms. Example games are Ori and the Blind Forest or the Will of the Wisps, Katana ZERO,  and many others.

Great game here. I'd love to see more like it.

I only can see a message saying "WebGL not available". What do I do?

Seems like your browser may be unable to support this game. You can perhaps try to use another browser.

thanks! Turns out I just had to update Chrome.

I like Dracula's face when you break the crystal)

Really fun! Almost played through the whole thing before I realized you could not only throw your axe, but swing it too. :)

Great game! Amazing execution for the limitation. The mechanics felt tight and there was great polish on the player's movement. How much is this version different from what was originally submitted?

I found your game while I was looking for very low-res but high quality games and yours is really one of the best I played so far!

If I can give you an advice:  I follow you because i really liked the first version of your Game but i don't know why you did an update 7 days ago. You should do a little devlog to say why you did the update. All your followers can see your updates as soon as you publish them: I will be happy to play your game again. Of course, your update can be almost nothing and my message is totally useless. I wish you a good Christmas.

Hi! Thanks for following! The update was really nothing. I only changed the webpage to not start the game immediately and instead wait for the players to begin the game if they wish to. Happy holidays!

Excellent game :) Thanks
Please, can you share with us the P8 file ?
To let us playing your game with libretro emulator on any harware. Thanks

Fun adventure. Feels like a new challenge every room. Would recommend.

This game is really great man. Damn fun for something made in a short time.

I felt that the second last boss could use a few more frames of anticipation to his moves since it was a little hard to judge which move he would do.

Regardless, it was a fun and epic boss fight. Great job overall on the game :)

It is a good experience. The axe is very fun to use, the graphics are well made and the sound effects match. Something that could be better is the music, it is not bad but can feel a bit repetitive

This game is awesome! The artwork is super gorgeous and well made, the soundeffects and the music are top notch too! I love the gameplay,the axe is super fun to use, it feels super fluid, and the difficulty is fair. My only complaint is that i wish i could fight dracula at the end hahah, anyways, great job!!

I enjoyed playing this mini Castlevania game, though it took me a while to figure out how to use the axe as a stepping stone (& the final level was quite the rush!) :p

The music is quite catchy, the main character is always bopping his head and swaying his body as if he's dancing to the beat, and he vastly resembles Charlie Chaplin :D

This is awesome. Got some really prince of persia 1 feelings here! Only the last level was annoying! Other than that, perfect! I'm a fan :)

Any way to get the Windows version running in full screen?

This is great. Feel really smooth.

Also, I don't know how to communicaty on this platform, so here's a video I mentioned on the stream, reacting when you mentioned star wars:

Omg I almost stuck here playing this, planning to try out the other stuff you made!

This is awesome! Well done. I missed the LRGJ2020, but I really want to make my first low rez game soon. Kudos!

Pretty impressive at all levels; visuals, audio & mechanics synergize excellently. The lowrezjam 2020 had to be truly amazing with entries of this caliber. My praise to dracunite's development staff.

In my opinion this is a great game. It's not too hard and not too easy, the animations for this carefully created platformer are great, especially the axe animations, though the goblins are the most annoying fucking thing, the enemies are made wonderfully. Overall this is no joke one of my favourite platformers. Good job.

great game with good control and the right amount of challenge. excellent work on art and music. congrats on 2nd place, kudos!

I'm stuck at first platform. I tried down key (both s key and down arrow), jumped, tried to smash it, but nothing worked. What am I missing here?

As in many platformers, press down and jump.

Thanks, I thought that I played so many games, It's odd that I never encountered that press down&jump mechanics.

Game is amazing, I especially loved the music and sfx. That's a factor which kept me playing despite of me dying so much. Sometimes I just waited and listened the music.

I liked the axe mechanics either, our hero has only 1 weapon but it's like he has 3 different ones.

Final 2 levels were cool, every level has it's own atmosphere, we never feel like we're just killing creeps in a hack&slash.

Only aspect I didn't like in this game is that we can't jump while running, I died a lot of times just because of that. But after I got used to it, that wasn't so much a big deal.

Thanks! It should totally be possible to jump whilst running. I tested it extensively using keyboard or controllers so I'm not sure what could be wrong such that you're unable to do it.

I wish this game was longer and had more enemies

9/10 too short but perfect otherwise

Are you intended to expand this game to a commercial version?

It's pretty good.  I always have a soft spot for pixelated graphics and low-res games.

Awesome game!  The pixel graphics are amazing, the gameplay is unique and fun, and the whole thing is just collectively well made!  I'd definitely give this a good rating if I was a part of this game jam.

I cannot jump high enough to get out of the pit with the skeleton :(

try using the axe as a platform

I found this one after a little moment. If one day you add some levels, i am ready to play them. I really like the modern improvement for a game boy game with the axe throwing. I like this kind of polyvalent features. 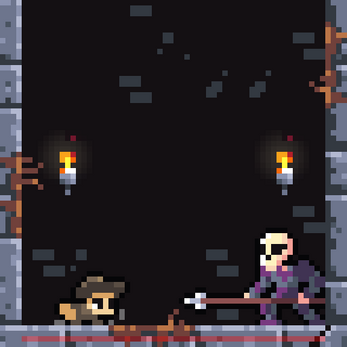 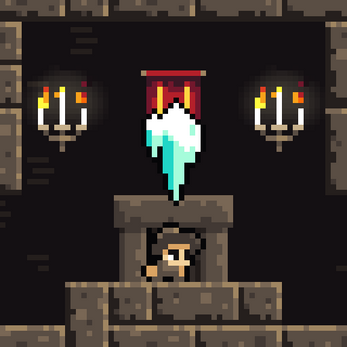